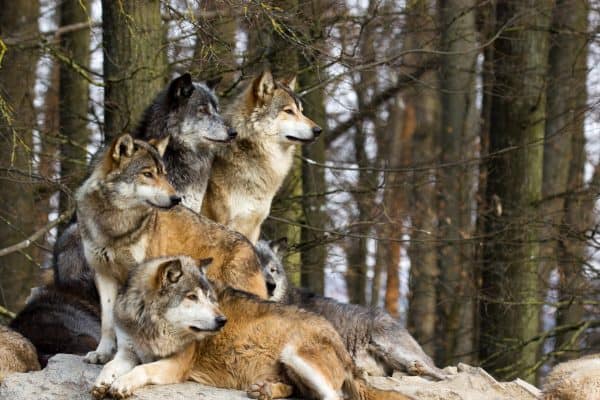 For years, there has been controversy amongst dog trainers over the practices of dominance theory (aka pack theory) and its use in dog training. Anyone who was a dog trainer 15-20 years ago thought that dominance was a crucial part of the training process, but with new light on the subject, pack theory has been debunked and these forceful methods being used are becoming less popular.

What is Pack Theory/Dominance Theory?

Pack Theory, also known as Dominance Theory, has been around for a long time but was made popular by Cesar Millan in his National Geographic show, Dog Whisperer. Pack Theory was developed by a group scientists studying wolves in captivity. The theory is based on the idea that each pack has an “Alpha Dog” and, through the use of dominance, the Alpha dog controls the pack. To better explain dominance, animal behaviorist, Dr. Sophia Yin, defines it as the, “relationship between individuals that is established through force, aggression, and submission in order to establish priority access to all desired resources (food, the opposite sex, preferred resting spots, etc.).”

For two reasons, this concept has been radically disproved and a more positive approach to dog training has emerged.

Through years of studying captive wolves, no one stopped to consider that the environment had an influence on the results of the study. Dr. David Mech, a wolf expert and senior scientist with the U.S. Geological Survey, was largely responsible for the original study that promoted Pack Theory. He has since then discovered a vast difference between wolves in the wild from those in captivity and has renounced the results of his earlier studies. Captive wolves with no choice but to live in unrelated groups behave very differently from members of what we now know to be true natural wolf packs.

The theory of Nuclear Families has become the more popular explanation for pack hierarchy. It has been discovered that a wolf pack consists of a single family of wolves made up of a father, mother, and any number of children. Very rarely would a pack of wolves allow an outsider into their pack, because they do not share a similar bloodline. The Alpha male is no longer seen as the dominator, but rather the father figure, doing what it needs to do to protect its family and survive.

Dogs and wolves are separated by thousands of years of evolution. Before any other animal on this planet, humans have been domesticating dogs for the purpose of companionship and work. Domestication has affected everything from the way a dog looks, to how they act and communicate, because of the need to adapt to the human environment.

Through thousands of years of breeding, we have taken the wolf and turned it into the perfect companion. We have changed their physical characteristics to give them a more desirable appearance, and we have bred them to work and fulfill certain tasks to make our lives easier. Some of the more noticeable physical characteristics that differ between dogs and wolves are:

Even more so, dogs have taken on differing behavioral characteristics because of the need to fit into the human environment. Major differences include:

Many of these behaviors have developed from the need to communicate with their human counterparts, including some undesirable behaviors. Wolves, in the wild, do not jump or bark excessively. These are behaviors that have developed in dogs, again, to elicit attention.

With these two reasons in mind, we can’t support the idea of training dogs using dominance theory simply because it is how dogs are inherently programmed to understand. This doesn’t mean that traditional correction training can’t work, but there are other methods that have been proven to better strengthen the human-dog bond. Once we begin to see the dog as its own “species” and stop relating them to their wolf counterparts, we can better appreciate their driving motivations and find a more enriching way of training them.

Dogs aren’t driven by the need to survive, which is greatly what affects a wolf’s behavior. This is because necessities are most often provided for them. The majority of unwanted behaviors we see in dogs today are driven by fear, anxiety, or stress. These fears are usually caused by a lack of socialization at an early age to the human environment, or the improper application of aversive training methods. Understanding the motivators or triggers behind any unwanted behavior is the first step to addressing the problem.

We hope this article has helped you to better understand your role as the human-counterpart, and not as the “Alpha Dog”.